Blog Stats - How famous am I?

Opera the uber famous browser on the days of Symbian (read Belle), has released its new iteration named Opera 15. Lately it was strugling in spite of having a fulliy featured mail client in-built, and more usefull in contries like India, the Turbo mode, which uses server side compressing techniques to offload the bandwidth a little for the user.

Few months ago Opera talked about Opera ICE and they said they’ll ditch their presto engine and go with the WebKit engine which is already used by the like of Apple’s Safari and Google’s modified version of the Chromium browser, the Google Chrome.

And yesterday they finally revealed that via their official blog, as its tradition, you can always get the next version under development from http://www.opera.com/next . The new version is named 15 in order to get along with its Android version number 14 so that when releasing it publically both will cary the same name Opera 15. What’s new in Opera 15:

What i miss, as off now:

Regarding the speeds, it was able to open multiple tabs on a old Pentium IV single core machine like “hey bro, that’s all you got? I thought you’re a power user, y u no give me some real challenge :P:. It was faster than i imagined it to be, annd all thanks to the blistering fast Web Kit rendering engine.

Opera is rumormed to use the currently under development, or more aptly under optimization, Blink renderin engine which will be housed under a Google Chrome browser near you, soon.

And now i wonder, what will Firefox & Internert Explorer do, cause literally all the other browsers moved to web Kit as thier core, that puts the future of the web browsers, a mystery to wait and watch.

And users who where afraid of Google’s tracking of usage for targeted ads and refused to use Web Kit based Chrome, can now use this, as both are quite same by heart. 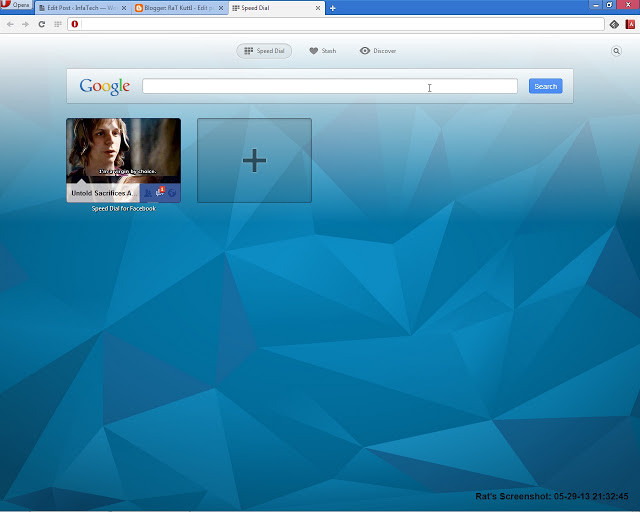 Leave a Reply, say something, pour your heart out ;) Cancel reply

This site uses Akismet to reduce spam. Learn how your comment data is processed.